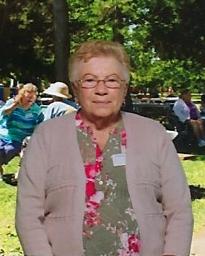 She was born August 29, 1939 in Pompey, NY, daughter of Charles and Gladys Welch Reynolds. She graduated from Cazenovia High School in 1958. She married Solan Hofferberth on September 20, 1958 at the Zion Methodist Church in Manlius, NY. Mr. Hofferberth passed away on April 13, 2008.

Polly worked as a cook for the Argonne Restaurant and also worked as a clerk for Pearl’s Department Store, both in Alexandria Bay. She was active in the Red Hat Society.

She is survived by four sons, Howard (Kathy), Winthrop, ME, Phillip, Theresa, NY, Tracy, Watertown and Terry, with whom she resided, Alexandria Bay, four grandchildren and three great grandchildren. She was predeceased by two brothers, Charles and O’Dell Reynolds and a sister, Vietta Hotaling.

A memorial gathering will be planned in the summer of 2020, at a time to be announced.

Memorial donations may be made to the Alexandria Bay Rescue Squad.

To order memorial trees or send flowers to the family in memory of Pauline M. Hofferberth, please visit our flower store.