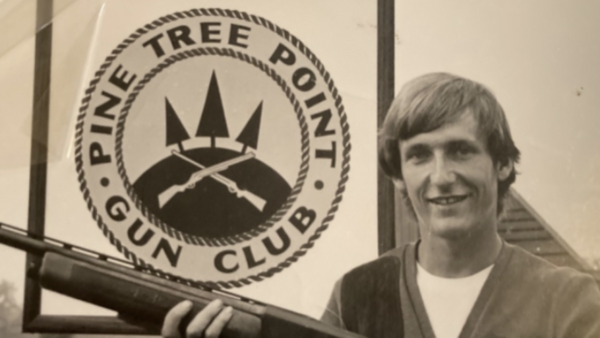 Damon passed away early on Friday morning at Hospice Home of Jefferson County.

Damon is a true River Rat. He was born in Alexandria Bay and spent his entire life there enjoying all the things the river has to offer. He was an avid fisherman, golfer, hunter, boater, hockey player and skeet shooter. He loved the river.

Damon married his high school sweetheart and the love of his life, Harriet Tidd and they were married for 15 years

He worked various jobs throughout his life and most recently owned and operated Shangraw Paint and Stain.

If you ever met or spent any time with Damon, chances are you walked away having had a great time and with a story to tell. He was very charming and usually up to no good. He knew everyone in town, and everyone knew him. Before he started his workday, he enjoyed a tour of the town which included hanging out at “the garage”, coffee at the North Star and stopping anywhere else he saw people or thought there might be something going on.

Damon aka Papa to his grandchildren, is preceded by his parents (Elaine and Art), his brother Noel and an infant son (Ryan). He leaves behind 5 children: Kristi Shangraw, Alison LaRock, Wendi Shangraw, Maxwell Shangraw III and Megan Gedbaw, 13 grandchildren, several cousins and nieces and nephews.

Calling hours will be at Costello Funeral Home in Alexandria Bay on Friday November 5 th from 5-7 with a service directly following.

To order memorial trees or send flowers to the family in memory of Maxwell "Damon" Shangraw 1951-2021, please visit our flower store.