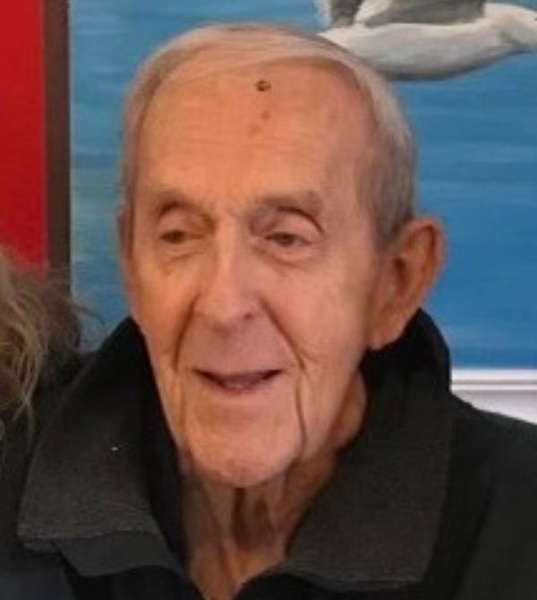 Jim was born February 14, 1930, the son of Elmer C. and Ella Salisbury Gosier. He was a graduate of Cape Vincent High School, class of 1947. He attended Wadhams Hall Seminary for a period of two years and then took off-campus classes from St. Lawrence University for two years.

“Uncle Sam” called Jim to duty and he spent September 1952 through September 1954 serving in the U.S. Army. Upon discharge he entered St. Lawrence University at Canton, graduating with honors in June 1956. In his senior year he was elected to Phi Beta Kappa National Honor Society.

Jim did graduate work at St. Lawrence and Potsdam State. His career as a mathematics teacher began at Cape Vincent High School in 1958. In September of 1972, with consolidation of the Cape Vincent and Clayton schools, he became Chairman of the Mathematics Department at Thousand Islands Central School until his retirement in June of 1985. Better known as “Big Bird” at TI High School, he was very proud of his teaching career and the many fine students he taught and likely remembered by many to have tossed erasers now and then!

Jim was a life member of the John C. Londraville Post 832 American Legion. He held many post offices as well as Jefferson County Commander and 5  th  District Adjutant. He also served as American Chairman of the International Goodwill Day Committee. He was especially proud to be a member of the Post Color Guard carrying the American Flag.

He was an exempt member of the Cape Vincent Volunteer Fire Department having held many offices as an active member. He was also a member of the Red Eagles Firematics Team.

Jim was secretary/treasurer for the Cape Vincent Housing authority for a period of 10 years. He was also elected to the Cape Vincent Village Board and served for 14 years, the last five of those years as Mayor. As Mayor, the closed sewer system was installed along with its treatment plant. Also during his time as Mayor he made an agreement with the company that was repairing the Breakwall allowing them to dock their barge and boats along the shore where the old pulp wood docks were located. In return, much seawall work was restored from material off the old Breakwall as well as installation of sidewalks and a safety fence.

At one time, Jim purchased a boat and enjoyed many hours of fishing. As soon as school was out in June, he and a couple of friends travelled to Kingston, Ontario and then up the Rideau Canal system to Smiths Falls, Ontario.

Jim enjoyed his home and took pride in having a well-kept lawn, trimmed hedges, and a small garden. He enjoyed the game of golf but somehow managed to forget his score when he reached the ninth hole. He enjoyed many winters of snowmobiling and cross-country skiing but eventually the lure of Florida prevailed and he spent a few winters in Lakeland until his illness in 2015 when he became a resident at Summit Village.

There will be no calling hours. Funeral services will be held on Saturday, June 11th at 10:00 am at St. Vincent if Paul Catholic Church in Cape Vincent. Burial with military honors will take place following the funeral service at the family plot in St. Vincent de Paul Cemetery in Rosiere.

To order memorial trees or send flowers to the family in memory of James V. Gosier, please visit our flower store.