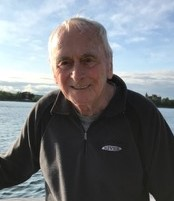 He was born July 30, 1939 in Watertown, NY, son of Delbert and Lillian Dickie Babcock. He graduated from General Brown Central School. He served in the US Army and the Army Reserves. He married Carol Bruyns on September 9, 1966 in Dexter, NY.

Faye began his career in banking with Marine Midland Bank in 1958, where he worked for over 20 years. He then worked for Jefferson National Bank, and then for Redwood National Bank, where he retired as manager of the Alexandria Bay branch. After his retirement from banking, Faye worked for several years as a sales representative for the North Shore Oil Company, West Monroe, NY.

Besides his wife Carol, he is survived by his daughter Katrina Keefe, her husband Dave, and his granddaughters Molly and Maggie Keefe, and a sister Nancy Weiler of Adams, NY. He was predeceased by three brothers, George, Dickie and James Babcock.

Calling hours and memorial services are planned for the spring. Memorial donations may be made to the Foundation for Community Betterment, Alexandria Bay Chapter, PO Box 358, Arnold, MD 21012, or the Alzheimer’s Association of CNY Chapter, 441 West Kirkpatrick Street, Syracuse, NY 13204.

To order memorial trees or send flowers to the family in memory of Faye G. Babcock, please visit our flower store.