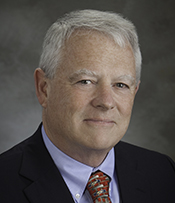 Born July 7, 1944 in Swampscott, MA, Dan is the son of Carl and Anne Goodwin.  He graduated from Swampscott High School in 1963 and then earned a BA in Economics from UMass Amherst.

In 1967, he married Katharine (Kitt) Wells in Rochester, NY.  The couple later had two children, Deidre and Rob.

In 1968, Dan entered the US Army, graduated Artillery Officer Candidate School, and was assigned to the Defense Language Institute and, later, to SASCOM Europe.  In 1972, as part of the initial drawdown of troops during the Vietnam War, he was honorably discharged as a captain.

Dan then began his career in financial planning at Lincoln Rochester Trust Company (later Chase) in trust and estate planning. Then, in 1990, Dan co-founded Goodwin, Bartlett, Greaves-Tunnell, which later became Cobblestone Capital Advisors (Rochester, NY).  His colleagues note he was known for out-of-the-box thinking.  Dan also earned both his CFA and CFP designations.  In 2003, Dan formed Cobblestone Capital Advisors of Florida, and he and Kitt split their time between Tampa, Rochester, and their summer cottage in the Thousand Islands.

A burial with military honors will be held at Riverside Cemetery at 11am on Saturday, July 24, followed by a Celebration of Life reception at the Thousand Island Club.  Both are on Wellesley Island, NY.

To order memorial trees or send flowers to the family in memory of Daniel R. Goodwin, please visit our flower store.
Send a Sympathy Card